An interview and retrospective of legendary producer Chris Tsangarides

A special episode of the award-winning CLASSIC ROCK AND METAL PODCAST presented by Olly Barnes includes an archive interview with legendary producer Chris Tsangarides who sadly passed away recently. Interviewed back in 2011 while producing Tokyo Blade's 'Thousand Men Strong'album, Chris talks about how he got started working with Metal bands back when he worked at Morgan Studios in London and regales tales from over the years and how things have changed in terms of technology.

Chris talked about his favourite bands to work with, Judas Priest, Anvil and the now legendary documentary 'This Is Anvil', Tokyo Blade and of course his long-standing partnership with members of Thin Lizzy.
"Phil Lynott said 'Do you wanna produce Thin Lizzy?' I said, 'Well I'm free for the next 40 years so what the hell!' I was just this kid and one of my favourite bands wanted me to produce them!"

On how he likes to record an album.
"There was a way of doing it that we used to do back then....You guys play it all together in a room and we'll fix what's wrong. That's what I think they mean by that 70s or 80s sound...and when us old buggers shuffle off this mortal coil, I hope someone's been listening to take over."

On how he saw himself.
"Because of certain successes one might have had, you're perceived to be this iconic whatever and that's not how I see myself...I'm a geyser that loves doing Rock music and all it takes is for me to like what I've been asked to do."

Archive interviews from back in the day...

Alan 'Fluff' Freeman presented The Rock Show on Capital Radio and then later revived the show on BBC's Radio 1. This entire show 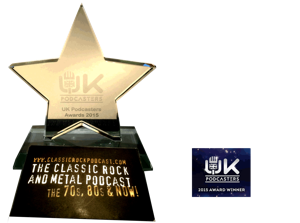 Thanks for signing up!

Finally!! Welcome back! We missed you!!! Best news of the month!